A chatty letter from Arthur, giving Dollie the details of the work he is involved in. The time table is so full that he is half asleep by the time he is able to put pen to paper in the evening. He is in comfortable billets … with a real bed and clean sheets! Alas Arthur misses his horse Ben as “the country is ripping, & I should like to get about, though there isn’t much time”. He has time for a “trim” at the local barbers, even though his hair is not that long “for I had my hair close cropped before the show – its cleaner in case of a hit.”

… Two dear letters came from you to-day – forwarded from the regiment, Thursdays and Fridays, (also a letter from the Mater & one from Auguste [Noel]). I am so happy to have your dear news again at last: I’ve felt starved for the want of it these last few days. I’m beginning to despair of ever getting my news off to you properly, dear. We have a pretty longish day of it; & whether it is because I’m tired after the show or whether it’s the fresh air, I don’t know but I always feel fearfully sleepy in the evenings! Anyway, dear, the weather has turned pretty good: but we have had a shower or two to-day & now it has set in to rain pretty steadily.

We have been working from a quarter to seven in the morning until 8 – this is drill. Breakfast at 8 and parade again at 9.10 till 1. This morning we practised “fire control” against a sham attack. Part of our attacking force were a squadron of Indian Cavalry who made a very inspiring charge over three-quarters of a mile against us.

Lunch is at one: & then we are on parade once more at five to 2. We then do bayonet fighting & physical drill till about twenty to four. At 4 as a rule there is a lecture: but to-day there wasn’t one, so I went over the road to the barber (a most excellent man) & had a hair “cut” or rather a “trim” (the French word “taille” describes it best) for I had my hair close cropped before the show – its cleaner in case of a hit. Thence to tea: since when I’m afraid I’ve slept a few minutes (& feel like sleeping now, dear, only Mess is at 7.45).

To-night there’s a concert on at 9: to which I expect we’ll all go. To-morrow D.G. no early parade: so it means a lie in bed till 7 instead of up at 5.45. This is not a bad little place we are in but its rather remote from anywhere. I miss old “Ben”, for the country is ripping, & I should like to get about, though there isn’t much time.

We get the continental “Mail” in the afternoon. By the way, I saw to-day that poor Geoff Bennett has been killed. I’ve a very comfortable billet, dear in a milliners shop. A real bed & sheets – heavens! The milliners – is that right ? are an old dame & her daughter – (who is very like Amy! and about the same age) who are very clean & affable.

I’ve heaps of letters to write but quite despair of writing them. I’m feeling very fit, dear the change is doing me good. Well, little lover, I must wash & change and get along to the mess. I’m just longing to hear from you again. Forgive the writing, dear, but I hav’n’t a table & am writing on my knee. 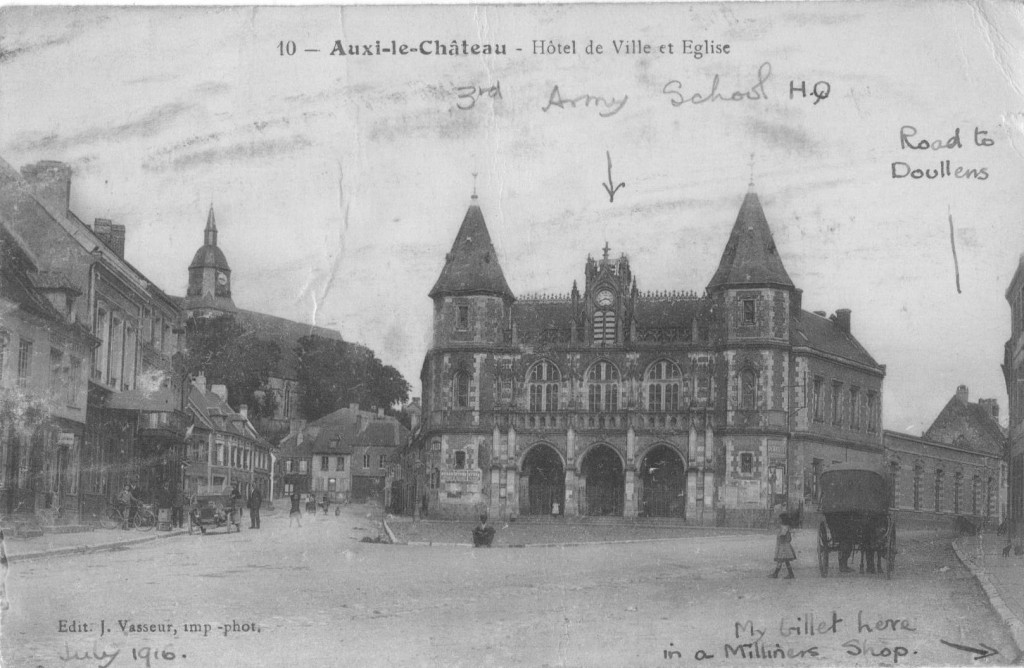