After a few days of not being able to write home, Arthur can finally put pen to paper and gives Dollie an account of his last few days in action. Casualties are so numerous amongst officers and men that Arthur has been put in charge of the Battalion, until Col. Howell could be summonsed from the Divisional School, to take over; Arthur is still helping him at HQ. The post has finally arrived and Arthur is more than delighted to receive six letters from Dollie – their wedding cannot come soon enough.

This is just to let you know that I’m fit & well D.G. The Battalion is up again near the line. It went in on Saturday [9th]. According to the new idea, we left a percentage of the Officers & men out with the Transport. I stayed behind this tour. Edouard stayed out as second in command & 4 or 5 others. However on Tuesday morning [12th] I had a note down from Sammy asking me to go up to help. So I went with Jones & Ely. We came out early this morning, rather weary & there is a lot to do We’ve had rather a lot of casualties – about 200 I think but chiefly “blighty” ones. Of officers about 8, I think.

Johnny Sutcliffe is away sick, Odell & Starling, two new subalterns have been killed, I’m sorry to say & we[‘ve] several wounded. Sammy at last – in the right knee, but I don’t think very seriously. So with Edouard [Noel] in the transport I’ve been in command of the Battalion up there!! Rochie is hit again in both hands, Thomas & Cahill, two of my subalterns in the arm, Oakley & Bert Pearce. But his was only a graze & he is back with us already. Anyway everyone is very cheery & the old man has come back to us from the Divisional School. He arrived this morning. Pro tem. I am at HQ helping him.

I’ve just had a perfectly splendid mail – six letters – which I shall absolutely revel in. You are a dear, God bless your sweet heart. I’m just yearning for the day when I shall get back to you – little sweetheart mine. I dare scarcely think of it. It’s such a waste of time being away from you. I wonder what you’re doing, day & night. You’re in my thoughts and in my heart… 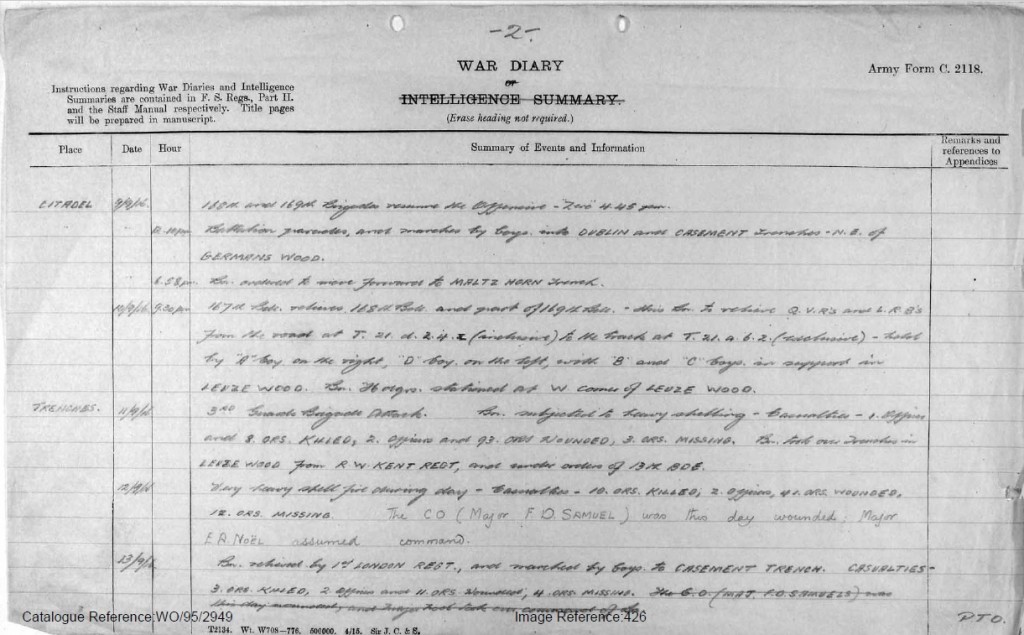