One Man and His Wars by Eve Bendall – 6 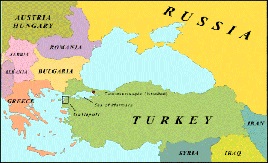 By 1915 the Western Front was clearly deadlocked and Russia was threatened, in the Caucasus , by Turkey. The British – spurred on by Churchill -decided to launch a naval expedition to take the  Gallipoli peninsula, relieve Russia and take the sting out of the Turkish Army. The naval attack began in February 1915 but was hampered by bad weather – and after considerable losses including 3 battleships, it was decided to call in the Army. However the attack could not begin before late April and this gave the Turks ample time to prepare defences and enlarge their armed strength. ANZAC (Australian and New Zealand Army Corps) troops attacked ‘Anzac Cove’ and managed to establish a bridgehead . British troops made several attempts at landing at various points near Cape Helles, but only established 3 footholds and needed urgent reinforcements; the Turks, with German expertise, further increased their strength.
A political crisis ensued in Britain and the Liberal Government was replaced by a coalition – Churchill lost his job as First Lord of the Admiralty but stayed in the War Cabinet.

The deadlock dragged on into the summer. In July the British reinforced the bridgehead at Anzac Cove and in early August landed more troops at Suvla Bay further to the north, in an attempt to seize the heights at Sari Bair and cut the Turkish communications. Both the offensive and the landings proved ineffectual within days. More British troops were landed to hold the area. Finally in the autumn it was decided to end the campaign and troops were evacuated in December (1915) and January (1916). The Turks had lost over 300,000 men and the Allies around 214,000.