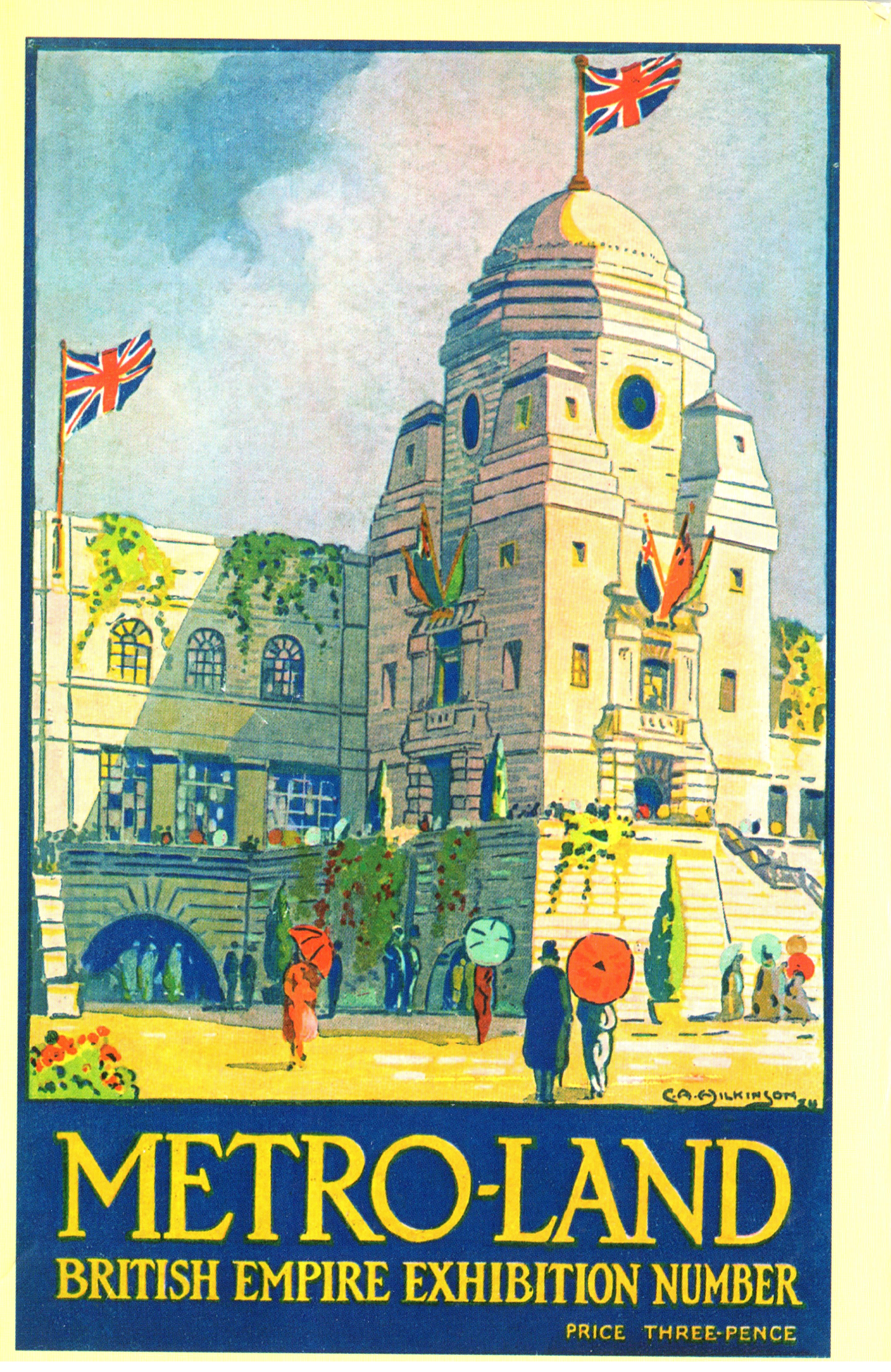 The British Empire Exhibition  at Wembley opened on Wednesday 23rd April 1924.  It was hoped that the Exhibition would strengthen the bonds within the Empire, stimulate trade and demonstrate British greatness both abroad and at home.  Of the 58 territories which composed the Empire at the time, 56 participated with displays and pavilions, the exceptions being Gambia and Gibraltar.

In 1923 , when plans were drawn up for the Malta Pavilion,  Edward T Agius (1849-1924) was still a significant figure representing Maltese interests in London and the UK. He was instrumental in ensuring that the Pavilion was built and ready for opening day.   In 1923  there was a preliminary exhibition to encourage the industry to participate and besides medals, monetary prizes where also given. An example certificate (see gallery) shows that the Chairman of the Committee was Ugo Mifsud , Edward’s nephew, and soon to be PM of Malta. (*)

The pavilion was modelled on a Maltese Fort with the front entrance as the gateway to Mdina and the side doors as one of the gateways to Vittoriosa (Birgu).  Detailed plans have not been found yet but we can ascertain from photos inside and out that the structure was about 60ft square and 20ft high  (with an extension above the entrance door) .  It had 3 rooms to show ‘Industrial Malta’,  ‘Malta Under the Knights’ and ‘Prehistoric Malta’. The ‘Malta Under the Knights’ hall had suits of armour borrowed from the Palace Armoury in Valletta.   ‘Prehistoric Malta’  had two paintings by the Maltese artist Robert Caruana Dingli  (younger brother of Edward Caruana Dingli).  These are now displayed in the museum at Ghar Dalam in Malta.

The Malta pavilion covered an area of 370 sq metres. The first prize for the best design of a pavilion went to Architect G. Caruana and the second prize to Architect Albert Laferla  (Alberto La Ferla) . The main entrance to the pavilion was a perfect replica of the main gate of Mdina, while the two side entrances were reproductions of the entrance to Vittoriosa.

The Malta pavilion was the most popular of the smaller nations’ pavilions. The Sphere of July 19, 1924 described it as “one of the wonder shows of the exhibition.” Elsewhere the Malta pavilion was described as “the most scientifically arranged of the exhibits of Greater Britain.” The Times (London) wrote on May 27, 1924: “Malta is able to convey a lasting impression of the Island through the delightful and artistic pavilion in which fifty centuries of its history are faithfully represented.” The lace section of the pavilion was the wonder and admiration of every visitor.

Lord Grenfell, a former Governor of Malta, then in his 84th year, was largely instrumental in promoting the Malta Pavilion. He was described by the Daily Malta Chronicle of January 28,1925 as “one of Malta’s kindly geniuses at Wembley.” It was Grenfell who had laid the foundation stone of the Malta pavilion. Dr (later Sir) Ugo Mifsud was local chairman of the special exhibition committee, while Edward Tancred Agius, president of the Malta Association in London, was appointed Commissioner for Malta at the exhibition.

The Malta pavilion had its own garden with neat paths and flowerbeds and benches, interspersed with kiosks selling lace and other Maltese products – quite apart from traditional Maltese refreshments. The overall effect of the magnificent pavilion and its well laid out garden was to turn that cherished spot at Wembley into a little Malta.

The three-storey pavilion looked like an early modern fortified tower. The entry points leading into the structure were built as replicas of baroque gateways to the medieval city of Mdina, Malta’s capital city before the building of Valletta, and the town of Vittoriosa, the headquarters of the Order of St John between 1530 and the Great Siege of 1565. The exhibition hall of the Order of St john in the pavilion, one of three spaces earmarked for display purposes, included a medley of paintings, mirrors, furniture, arms and armour in what could be best described as an antiquarian-styled display of historic relics in support of the historical legitimacy of the island-Fortress paradigm. Contents and container mimicked the island-Fortress paradigm within the remit of a colonial exhibition celebrating Empire. 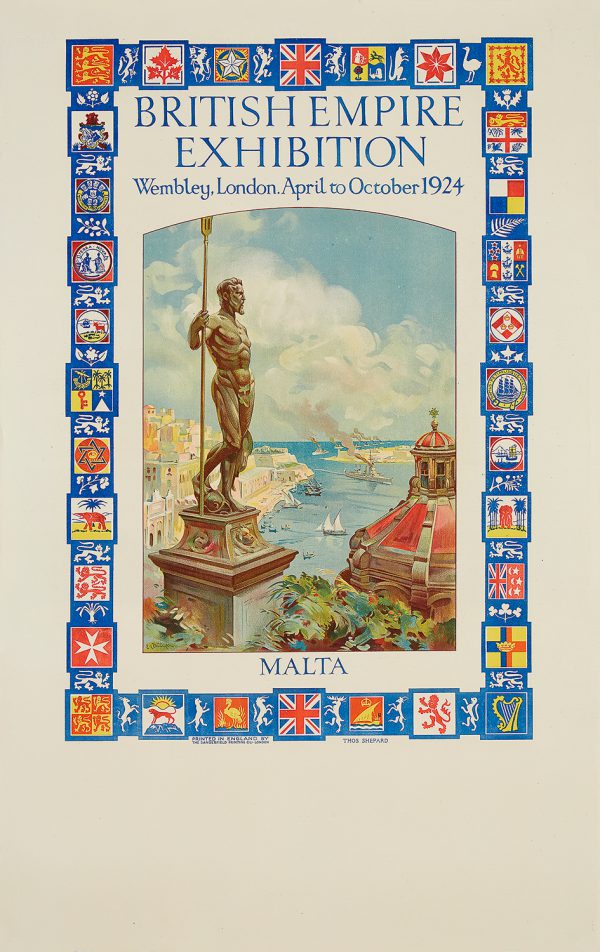 It is also known that Albert Laferla , Malta Director of Education,  visited London in August 1923 and stayed in Howitt Road, Hampstead –  a few doors away from 3 Belsize Grove, the family home of Edward T Agius, and likely to have been there on exhibition business.

Before the opening, a set of postcards was produced and these can be seen on sale in the photo of Edward Agius in the Hall of Knights (and shown on this page in the gallery below).

The 1924 diary of  Arthur Agius tells us that the family (living in Hampstead and Kensington) were present on opening day and made frequent visits during the 6 months that the exhibition was open.    On Wednesday 28th May Queen Elena of Italy, accompanied by Queen Mary (of England), visited the Malta Pavilion where they were presented with bouquets by Edward’s grand-daughters  (then living at 22 Downside Crescent, Hampstead)  Marie Agius (aged 7) and Suzanne Agius (aged 6).

On 24th May correspondence in The Tablet had indicated that there was no Catholic presence at the exhibition.  Funds were soon raised and by the end of June a small Oratory was built on a spare plot of land across from the Malta Pavilion.  This was formally opened and blessed  by Cardinal Francis Bourne on 30th June.

Sadly, Edward Agius became terminally ill in the following weeks and died at the family home of 3 Belsize Grove on 21st September.   His funeral was held at St Dominic’s Hampstead  and then, on 10th October, a Memorial Mass was held in the Oratory at the Wembley Exhibition  with all members of the family then in London in attendance.

The exhibition was re-opened for 6 months in 1925 but this time with no Malta Pavilion , perhaps because there was no longer Edward’s driving force behind the enterprise.  He was ever the promoter of all things Maltese from the moment he arrived in London 1869 to his passing in 1924 , and leaves behind a diverse legacy of over 400 descendants spread all around the world,  mainly in England and Malta.

(*) With thanks to John Magro for the certificate and extra information.

Catholics and The Wembley Exhibition

A framed set of photographs hangs in the Casino Maltese, Republic Street, Valletta, presented by architect F C Bonavia.   With thanks to the Casino Maltese for permitting  Susan Mompalao De Piro (great-granddaughter of Edward T Agius)  to photograph the collage  and allowing us to display on this page.

Select any photo to enlarge and scroll left/right…