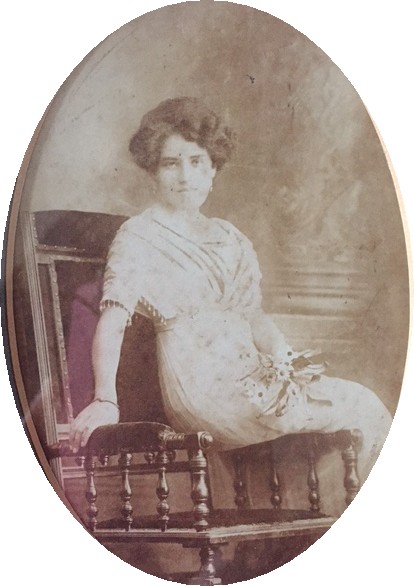 Mary’s grandfather was Carlo Maria Muscat  (married to Giuseppa Cohen, a direct descendant of Giuseppe Cohen who foiled the plot to assassinate Grandmaster Pinto).   Carlo was President of the Chamber of Commerce in Malta in 1889 and lived in the house on Strada Reale/Kingsway/Republic Street that is now the La Valette Restaurant and Club.

In WW1  Mary’s brothers  Joseph Louis Muscat and Charles Muscat both served in the British Army. At first Joseph was with the Kings Own Malta Regiment of Militia at Gallipoli and then with Kings Royal Rifle Corps  and Munster Fusiliers.    Charles served with the 7th South Staffordshire Battalion , first at Gallipoli  and  then the Battle of the Somme , when  he was awarded his MC for actions during an offensive near Thiepval in July 1916.  He later took part in the Battle of Passchendaele near to where his 1st cousin Richard Agius was killed on the morning of 26th October 1917.

As all the wounded from Gallipoli arrived in Malta in 1915 there was a great expansion of the number of hospitals and a call for more nurses to which Mary responded.   She nursed mainly at the established hospital at Cottonera and  St Patrick’s temporary tented hospital. 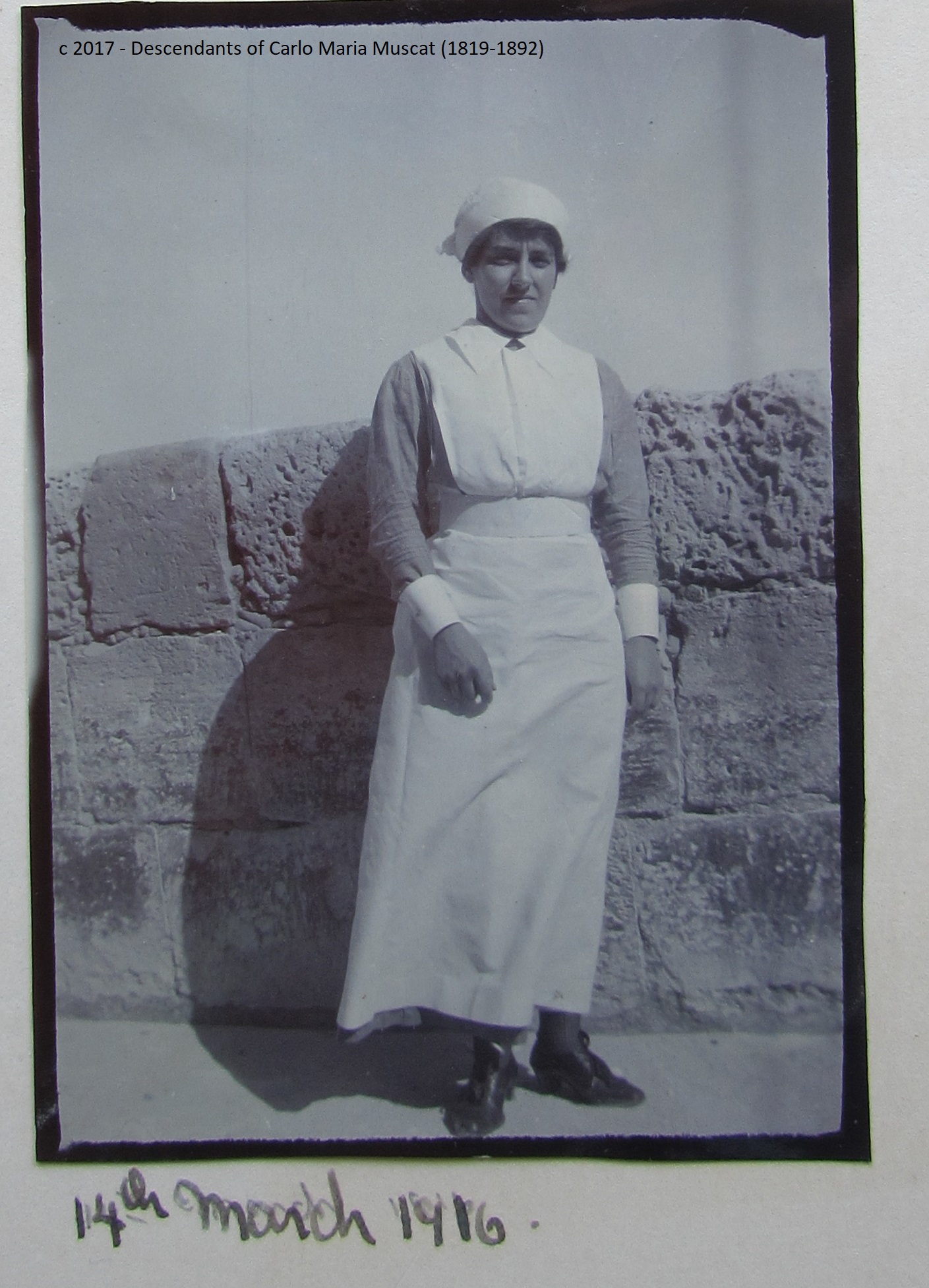 Mary made a major photo album of her time as a nurse in Malta in WW1 and thanks to Charles’s son John and grand-daughter Anne we are able to publish the album here.   The photos include many unique views around Malta and  names of a number of soldiers, that Mary nursed and worked with.  St Patrick’s Hospital was dismantled in April 1917 and Mary then returned to Cottonera Hospital,

Between the wars Mary nursed in London  and remained close to her cousins , the family of Edward Tancred Agius in Hampstead.  She ran a boarding house in Sheffield Terrace, Holland Park, London, during WW2 , then moved, with her newly married brother Charles and wife Ellen, to her 2nd boarding house in Lexham Gardens, where her nephew, John, was born in 1946.

In 1946 , she returned to Malta leaving the boarding house in Lexham Gardens in the care of Charles and Ellen, but returned 2 years later to help Ellen bring up John and look after Charles, who had become unwell.  She sold the lease on  Lexham Gardens and opened a new boarding house in Stanford Road nearby , where she welcomed family and any Maltese friends visiting London.  She stayed in London until 1957 (after Charles died in 1955) and then returned to Malta where she became a resident at the Regina Hotel, Sliema, always welcoming the many cousins who would visit from England. She was back near her brother Joseph and sister Lily as well as the Agius sisters who had married Maltese men and raised their families in Malta (Inez Cassar , Laura Mompalao De Piro, Mabel Arrigo & Marie Denaro). 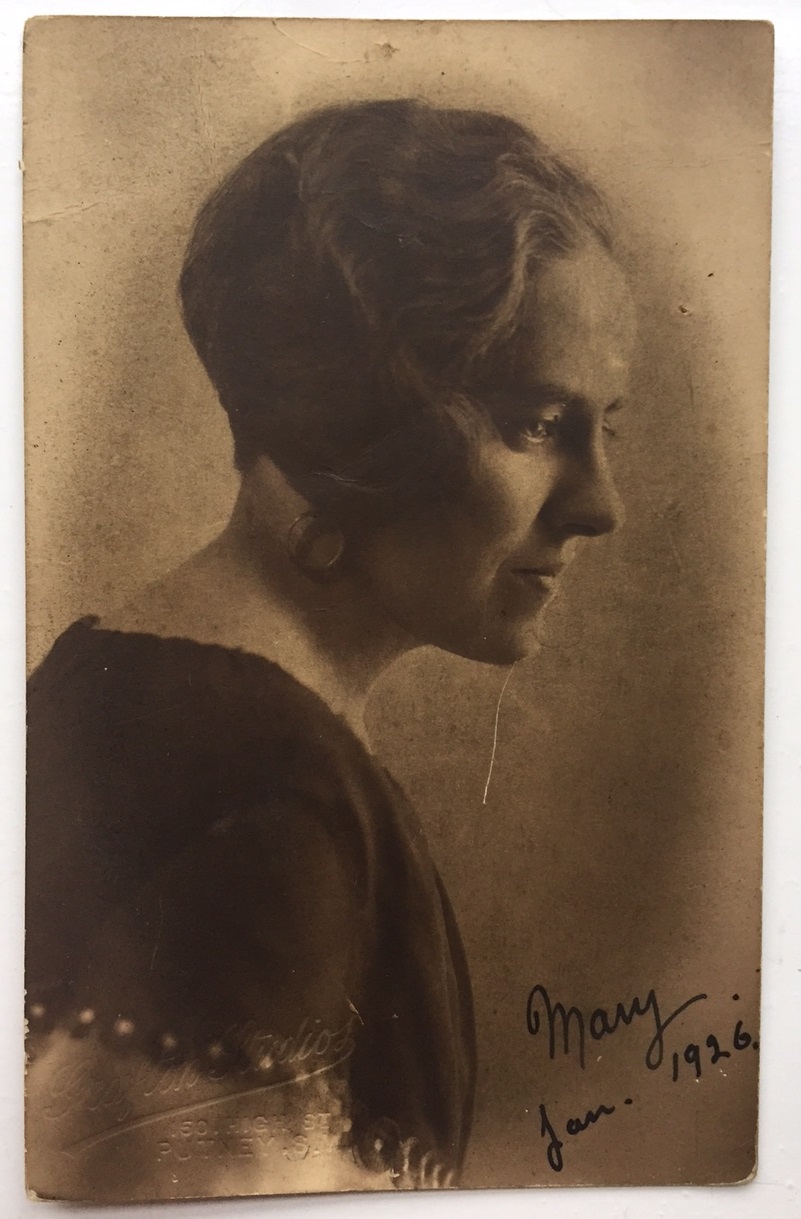