A rousing Malta send-off for Arthur and the troops – as they leave the island for service on the Western Front. Dollie and her Mother follow them across Europe as they begin their journey back to England:

… I miss you so much I don’t know how to begin to write. My heart is sore within me. I feel wretched without you. I didn’t know how to leave you yesterday. As I rowed away in that beastly dghaisa from the “Mongolia”, I left all that I cared for in life behind me. You darling. I love you so, more than I have ever done before.

But let me give you my news. When I left you I rowed over to the landing place and took a carrozin from there to the Custom’s House. I got there about 10.25. The Battalion was there but had only been there a few minutes so that everything was all right. Frank was there and Joe Muscat, also Laura [Burns], Marie [Denaro] and one of the Aunties. Inez [Cassar] came on later and also Mabel and Tony [Arrigo], who gave us your news and your note. Thanks awfully for it, darling, I loved to get it. I was so pleased to hear that you were well fixed up. The Colonel asked what kind of cabin you’d got.

The Battalion embarked in two halves; I was in the second lot to get off. We were taken out to the “Avon” – which lay as you know in the mid harbour – by a tug with a lighter on each side. We got on board about 12.40. She is a very fine ship, about 11000 tons and very comfortably built, though the saloon has been spoilt as it is divided into two with boarding. The smoking room too has been transferred into a Mess for the Serjeants. Several of the men have first class two-berth cabins; temporarily made into four berth cabins.

The 4th Battalion embarked after us. We sailed about 3.30, the Neuralia leaving harbour just before us. It was quite an impressive send off. The Barracas were crowded, everyone cheering. The crew of the French battleship “France” lined up and cheered us as we went by: boats in the harbour hooted and two bands, one on the Lower Barraca and one on Fort St Elmo, played “Auld Lang Syne” as we passed. The girls were at the Lower Barraca – we saw them quite well.

It has been fairly smooth, but I am feeling rather “muzzy” and fled from dinner last night to lie down. About half the Officers did the same. I’m still feeling a bit giddy, so please forgive me darling, if I appear a bit incoherent. I’ve quite a comfortable cabin – single berth outside cabin on the port side. But I sha’n’t enjoy it long. As I daresay you’ll see from the post mark we are due to arrive at 8am on Tuesday morning, so we’re steaming quite slow. We are just leaving C. Bon on the North coast of Africa.

Last night I turned in at 7.30 and got up this morning at 8, had a ripping bath, but funked brekker. We had a parade at 10.30 for five minutes and a short church parade at 11, held by Alfred [Agius]. 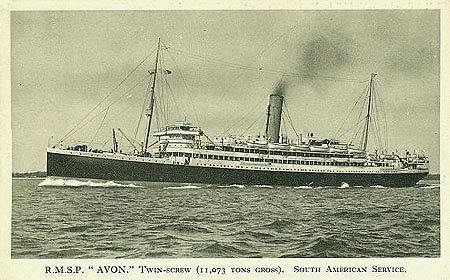