Description of the two-day journey to their current position; an early start and memories of an earlier train journey [from Etaples] – before the brigade first saw action; a long cold search for the Officers for any warmth and food, after settling the men for the night – the locals are churlish and offensive; a morning march to Vermelles, via Sailly, and Arthur is now camping in a bitterly cold cellar (borrowed from the Gunners) – the place has almost been destroyed during fighting between the French and Germans; they are now just about a couple of miles from the front, Hohenzollern & Fosse 8 – a landscape of railways, mines and huge conical slag heaps – so different from the eternal flatness of the country further north.

Despite their numerous moves and the state of the country – the army postal system is doing a wonderful job! Arthur praises their efficiency – but wonders about what is going on at the home end as Dollie is not getting his letters regularly.

It seems years since I wrote to you last, dear. The time has gone quickly, but we’re not very comfortable, and I’ve longed, as I do long now, to be by your side. Let me give you my news first, before I answer your dear letter of Saturday.

Tuesday DG was very fine. We were up soon after 5: for although we were doing the first stage by train, the transport was going to march. Parade was at 8.45: & then we marched off the village green, down the hill through the village & so into L-. Here, after a wait of nearly an hour, we entrained together with the 23rd. It seems strange to think that the last [time] the battalion was entrained was last January, when we came up from Etaples to St Omer “unblooded”.

After about an hour in the train, that is to say, soon after 12 we arrived at N-. Here we got out & marched N.W. a couple of miles to a village called V-. Here we met the transport & here we were to stay the night. We shared the village with the 23rd & a Divisional HQ that were there for the day. The result was that we were very hard put to it to find room for the men – accommodation for the officers was nil. After much searching, the CO & HQ had to clear off to the next village. We managed to find a loft in V- but it was bitterly cold. We had had nothing to eat since 6 in the morning & there were no possibilities of obtaining food or warmth. So we then trudged the village, trying nearly every house to find (a) a room with a fire where we could sit & eat (b) sleeping room or at least (c) a place where they could give us coffee & something to eat. But the local inhabitants were singularly churly & offensive. Finally we routed out the Maire of D. (the village where the CO was) & after one false effort succeeded in getting a bed each but what was more important, permission to use his kitchen. Here, at last, dear, was warmth & a place to eat: & here, then we had our meal. Oh, the joy of it.

… I had to finish off, dear, for it was time for parade. We are now in our allotted position where we shall be for a week. But let me continue, little one, from where I left off. We didn’t stay up late last night, and turned in soon after 8. Wilcox & I shared a room together. Nearly all the cottages had electric light from Br—y: the folk also told us that B- supplies light to Paris.

This morning, dear, we were up for breakfast about a quarter to nine. Parade was at half-past ten. We marched here or rather to a place called Sailly, getting there about 12.15. There we halted till 4.15 when we came on here. The CO stayed at Sailly.             Here at Vermelles we are all lodged in cellars. The gunners have pinched all the best ones – as usual, but we managed to borrow one off them. It was very bare – but we’ve found a table & one chair, minus a seat, also a packing case. Besides that we’ve fixed up a fire & rigged up a screen over the entrance so that it’s fairly snug, but bitterly cold. We have our valises up here & the men their blankets.

There was fearful fighting in the streets of this place, when the French wrested it from the Germans, especially in the Chateau. From what one could see in the dusk, the place has been “strafed” to bits.

The country is extraordinary here – it rolls a bit & there is not the eternal flatness of the country further north. But trees are few, hedges nil, & mines & railways abound. The slag heaps, unlike those at home are nearly all pyramid in shape, & raise their great bulk to a great height. We are now just about a couple of miles from the front, Hohenzollern & Fosse 8.

And now, dear, I’ve two dear letters to thank you for – for another letter reached me up here to-night. God bless you – you do help & comfort me beyond all expression. I cannot understand how it is that you have not heard from me. It’s absurd – the posts seem all at odds & ends homewards – outwards they’re wonderful.

Two mentions of Arthur by name in the War Diary for December (on 15th and 19th). 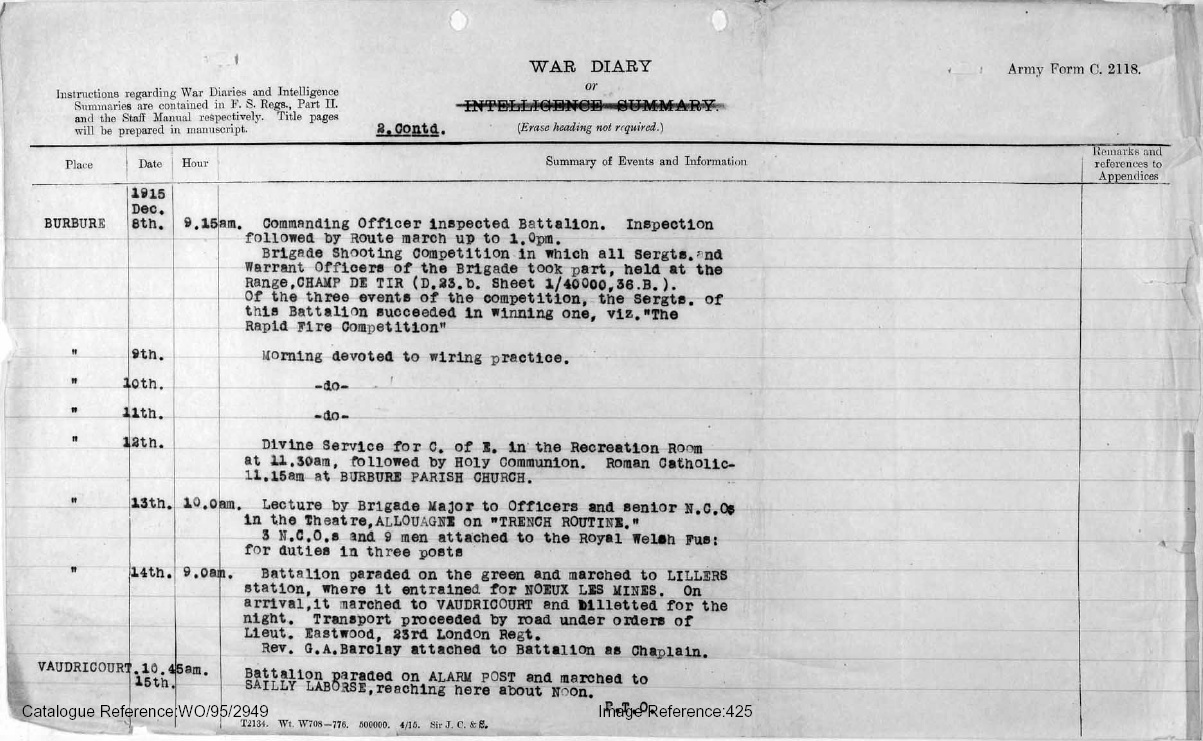 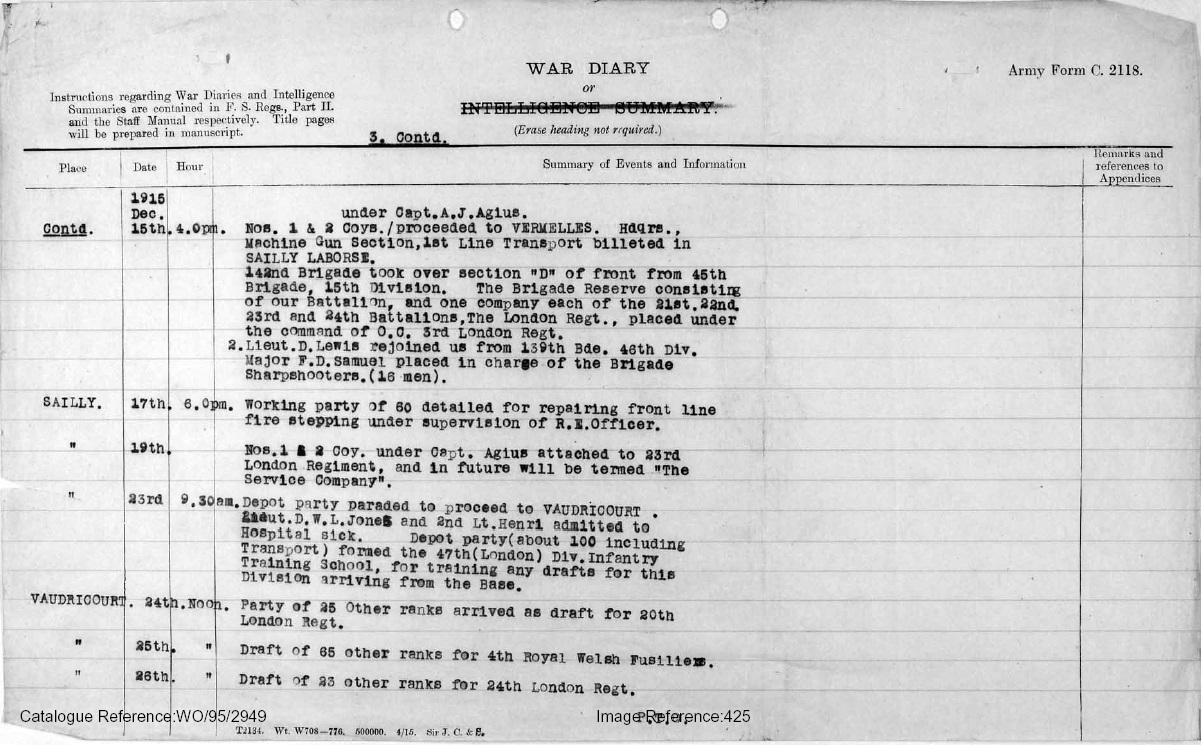