A welcome chance to put pen to paper – Arthur has been on the move for the past few days and hasn’t been able to write to Dollie – not even a post card; they were delayed leaving the line, and unfortunately were shelled – with 3 killed and 5 wounded; the new billets are strung out along a rather dirty high road and Arthur [after everything he has been through!] was put out to find a spider this morning in his “very comfortable bed”. A fortuitous meeting for Arthur: “Yesterday afternoon … I was crossing the road to my billet … when a car drove by. Seated in front was Fr. Stephen Rawlinson, who is an old Downside priest. He was secretary to my uncle [Archbishop Ambrose Agius] in the Philippines, was a chaplain throughout the S. African war & has been through this, & is now a CMG & Chief Chaplain out here. He stopped & got out & we talked for two hours. He is a sterling chap – he’d have made a first rate soldier”.

As I expect you’ll have guessed we’ve been on trek back for a “breather”. We left S[ouastre] on Friday; reached here about 1 at night. Yesterday we were up pretty late. I was at HQ all the morning, in the afternoon we were on parade until after the post left. It apparently leaves here earlier than usual. I’d have sent off a postcard, but I’ve mislaid mine. Its now 4: this morning I had a message from Sammy he wanted to see all officers. I was kept up there till 1 then lunch and parade.

I’ve 3 dear letters to thank you for and answer, but I think, dearest, that as the post goes at 4.30, I’ll just give you my news & write again later on. Well, darling, on Friday we that is C & D left the place where we were in reserve about 11 & rejoined the Battalion at S[ouastre]. From there we were to march at 2; unluckily this was put off till 6. At 5 the enemy in retaliation for some strafe of ours shelled us in the village. It was quite unpleasant: they killed 3 & wounded about 5 – one shell nearly hit HQ. We marched about 6 & got in here as I’ve said in the middle of the night. I understand this is not to be our final destination. Anyway, darling, I’m out of fire for a bit; so you mustn’t worry, little one, will you.

This place is a long straggling village on a high road – rather dirty & miles long. HQ is about three quarters of a mile up the road – so its no joke getting there in a hurry! I’ve a very comfortable bed – though I found a spider in it this morning! Still, that luck, isn’t it, dear. Our mess room is not up to much. It’s a long room in an estaminet, with a midden on one side & a backyard on the other. The servants have to cook in here as well. Its not worth fussing around if we’re only here for a day or two – & we’ve improved matters a bit by dividing up the room with a curtain of waterproof sheets and keeping the window that looks on the midden permanently shut.

Last night, darling, I was tired and turned in very early. This [morning] I went to Confession, Mass & Communion at 9.15. I was so pleased to get to Communion – as you may imagine darling, for I hadn’t been able to go since before the strafe – nearly 8 weeks ago! Yesterday afternoon about 5 (after parade & tea) I was crossing the road to my billet, meaning to change & write to you, when a car drove by. Seated in front was Fr. Stephen Rawlinson, who is an old Downside priest. He was secretary to my uncle in the Philippines, was a chaplain throughout the S. African war & has been through this, & is now a CMG & Chief Chaplain out here. He stopped & got out & we talked for two hours. He is a sterling chap – he’d have made a first rate soldier.

This afternoon we’ve been on parade – physical drill & bayonet fighting. Part of the physical drill we teach now are games – all sorts of fun. The men get fearfully keen & are a joy to behold – they’re just like a lot of children, bless ‘em, and love the chance that this open air life is giving them.

Dom Stephen Rawlinson OSB –  In Chaplain’s Uniform and as Secretary to Dom Ambrose Agius in Manila. 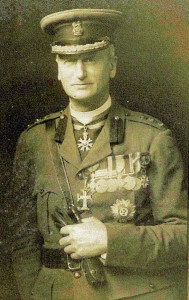 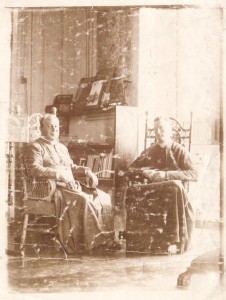