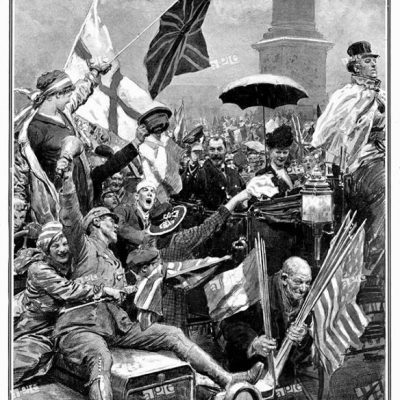 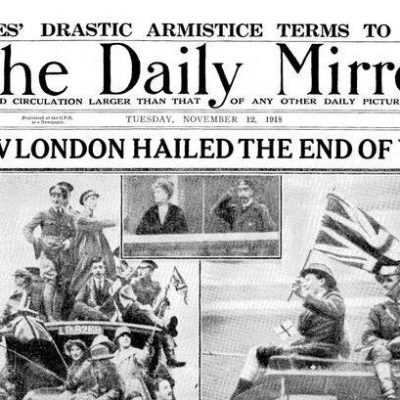 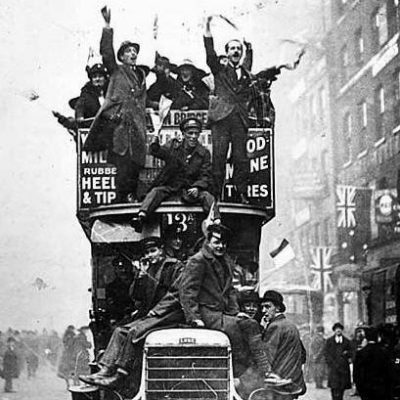 11th November 1918: Almost a normal start to the day at India house for Adela. But at 11am the guns sound and London goes wild with relief. Given the rest of the day off, Adela and her work companions are carried along with the crowd – a frightening experience at times; her account is not for the faint-hearted. Eventually she reaches home, exhausted, and writes to Edgar: “ …So that’s my day. But all the time I wondered what you were doing & where you were & longed for you to be with me. Who would have thought all this, this time last week, your last night. I’m living now for the day for you to come home… It’s all over now. You’ll soon be home…”

… I’ve just arrived. (I’m first!) I’d rather get here at 9 than work all day on Saturdays, wouldn’t you? I was the first down to breakfast to. I went to No3 to see if there were any letters, but no luck. I haven’t heard from Hubert yet [Adela’s brother], and I can’t get my clothes from Winifrede, so I’ve written to Aubrey to go down and demand them and send them off himself. They are slackers. It’s a week now over, since I asked for them.

I hope I’m not sent up to those French Officers today. I really get the ‘wind up’ when I go there. I feel such a fool. A man has just turned up so I must shut up. Will write again tonight

… I’m writing this in bed – it’s only 9.30 but am very tired. I went over to No3 for dinner. I missed you very much darling, tonight of all nights. When you hear my experience you’ll laugh. I’ll start from the beginning. At about 11, we were all sitting very quietly in the office when guns started to fire, & some idiots thought it was an air raid !!!! Well we all flocked out frightfully excited, then we were told we could have the rest of the day off.

So Coonie and I and a Miss Starky got pushed by the crowd to Buckingham Palace and we saw everything. Of course we had flags. Well on our way back (you can imagine what the streets were like, motor lorries crammed & taxis, 20 & 30 on the mud guards etc all mixed up together, officers, men, girls, boys & all sorts). We got as far as Trafalgar Square and were standing when suddenly I saw Miss Starky being hauled up on a dirty filthy steam lorry – I hadn’t got time to think when I heard a shout by me “up” and I was thrown on too. It was all so sudden that I started to laugh, but I really was very afraid because I was falling off and had my back to the road. So said “Don’t let me fall off” and a sailor said “No Miss, not while I’ve got ‘old of you !!” I had to let him hang on to me or I should have been on my head. It was frightfully funny & the men were quite nice, but I was thinking how I could get off, and by this time I’d no idea where I was, & was thick with grease – my hands were like navvies. You’d have loved to have seen them !!!!

Suddenly I saw a man on the footpath doing nothing. So I shouted for him to catch me, the lorry still going. This was even funnier still, he held out his arms and I leapt & he caught me but we both nearly fell down. Well that ended that & after lunch I started to make my way home. This was about 3 o’clock. When I got to Holborn I found tubes closed. I nearly died of fright, because I’d no idea how to get home, buses impossible & the crowd terrible by this time. Everybody drunk & dancing & being sick and having fits etc etc.

So I waited a bit & crept through the bars in the tube & after about an hour they started again, but it took me about another hour to get on a train & eventually arrived home at 6 o’clock – dead not to be moved. So that’s my day. But all the time I wondered what you were doing & where you were & longed for you to be with me. Who would have though all this, this time last week, your last night. I’m living now for the day for you to come home.

Daisy is fearfully excited & wanted me to go to the West End with her tonight – not much – we should get killed & never get home.

Good night you darling. It’s all over now. You’ll soon be home

All my fondest love & kisses