12th November 1918: The day after the Armistice. Adela is back to work at India House; “It’s a lovely morning again and everybody so happy & full of life … the people are still drunk & mad in the streets”.

… I was pleased to hear from you this morning. It’s a lovely morning again and everybody so happy & full of life.

I’m nearly always the first here, but never do any work till the others come, except open letters, half of which I don’t understand. I’m quite happy here, everybody is so nice…

The people are still drunk & mad in the streets. Goodbye now darling, will write tonight …

Meanwhile on the Western Front…

How four War Diaries reported the Armistice,    Arthur Samut is listed as one of the 2nd Wiltshire Officers present on the day. 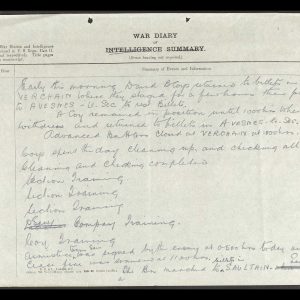 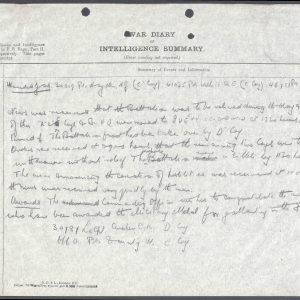 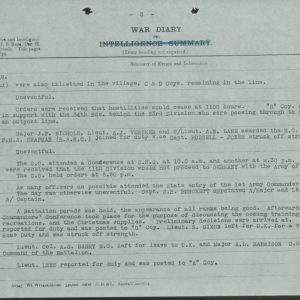 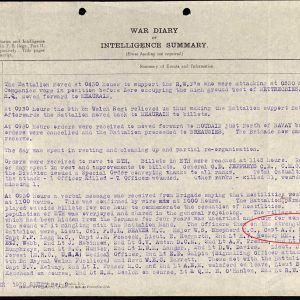 And Charles Asphar writes home on the 12th to say he has met  Charles Muscat….

Well. what about IT now Aye? Fighting is over and both your future son in law [Willie Parnis?] and son alive and kicking. After this you must never even think of worrying about anything: the worst is over and there is nothing but sunshine in view.

I shan’t be able to come to you for the present. I’ve got to see a bit more of the World before. Some time in Germany. Aye What !?!?

We are still moving Eastwards. Its always new country, new surroundings, new beds and new faces. I don’t think we are yet allowed to say where we are so its sufficient for you to know that I am close to the Belgium frontier in a little town and living in one of its “Chateaus”. The rooms are bare and lofty and cold at night, but not as cold as sleeping out in the open. The place has a few huge shell holes in it, but the greater part of it is OK…..

….Have to stop here as I have to go and pay out the Coy. Just as I was finishing a runner from the 7th Btln. of the S. Staffs came with a note for me and to my surprise I found a note from Charlie Muscat He was in another Chateau about 100 yds up the road. He was going up with some other officers and men looking [?] his Btln. They were very short of rations so I brought him to have dinner with us. We had a long chat afterwards and we said goodbye to each other at about 11.30 RM. or rather 23:30.

We got the news this morning that we are now allowed to say in our letters where we are etc. and to use cameras. So for your information I am in a little village south of the Valenciennes called Saultain. We also leave here any day for a march to the Rhine. Bon Aye!!??

We got the news that the Armistice was signed on the night of the 11th at about 9 PM. or rather 2l:00. The message was intercepted by our wireless and messages sent out to all Coys…..

…It came so suddenly that we took some time to realise what had happened. The men took less time. Our band came out playing the Marseillaise and God Save the King and started marching through the Village of Avesnes le Sec. We started throwing up Very lights and singing. Aeroplanes came over burning huge lights and we were all as cheerful and as happy as could be.