One Man and His Wars by Eve Bendall – 10 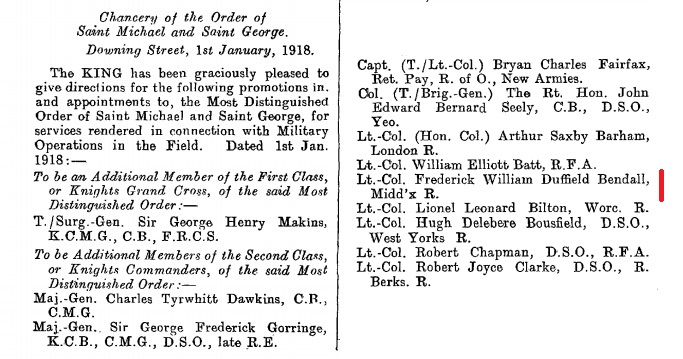 In January 1918, when he must have been living in the Hotel Russell, London – a telegram was received calling him to Buckingham Palace for an investiture – the award of the CMG (Companion of the distinguished Order of St Michael and St George.) It reads “Your attendance is required at Buckingham Palace, on Wednesday next the 9th inst. at eleven thirty am, Service dress; please telegraph acknowledgement .  Lord Chamberlain, London”  The date is indecipherable except for UA – but as the 9th January 1918 was a Wednesday it is probable  that this was the date. 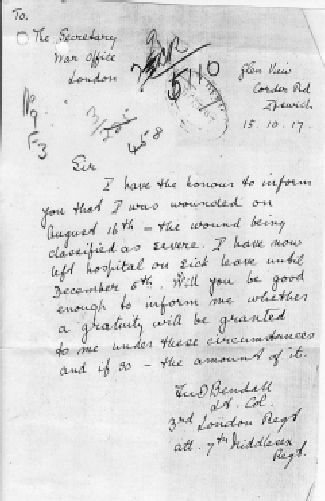 Even before the news of his award in the New Years Honours, Fritz started his campaign to get back to he Western Front; his letter (opposite) shows that he was discharged from hospital, and by 5/12/17 was living at home in Ipswich – and clearly concerned about money although he must have still been on full pay.. The notes show that he did – over the next few months – receive two lump sums as gratuity – totaling £449.  On 27/12 he wrote again to the War Office ‘ ‘Dear Sir. I have the honour to inform you that I was medically examined on Dec 5th and granted one months extension of my previous sick leave. I am therefore reporting for instructions for a second Board. As I shall be in London next week I should prefer to attend a Medical Board in London, if this may be permitted – no expense will be incurred by this.’
Between the times when the 2 letters were written, the Bendalls moved from the address in Corder Road (where Ida Kate and Sharlie had been throughout the war – to a house in Fonnereau Road.-possibly more room was needed with Fritz at home.

The next letter is to the President of the Medical Board, written 12/3/18

‘With reference to the Medical Board at which I was examined yesterday morning – I made an appointment with Sir James Mackenzie for this morning and was thoroughly examined by him. A copy of his report is attached. I am sending this copy to you as it appears  to me useless under hese circumstances to attempt any form of treatment. Sir James Mackenzie expressed it as his opinion that I could only do office work, or work of the nature of that performed by an area commandant, or some such employment, in France – and that I should be no more suited for more strenuous work in two months. If the Board decide that this is so, I should be very much obliged if you would inform me in what category I  may consider myself , as I am very anxious to make an early application for such employment as the Board may decide I am fit for.’

His frustration is clear. On March 11 he saw the Medical Board again; – a note from them to the War Office reads
‘The Board would point out that Sir James Mackenzies certificate does not help matters in the direction of fitting this officer for duty. The heart is extremely irregular and the Officer was doing hard physical work (notably digging his garden.) Under such a condition the heart will not improve. BY ‘special treatment’ the Board meant rest (with other matters considered appropriate) under medical supervision.

2 weeks later, Fritz wrote to the War Office -’Sir, I have the honour to inform you that on March 11 I was re-examined by the Medical Board at Adastral House. The Board recommended that my leave of absence should be extended for two months; I have not, however received the usual confirmation of this on form B4 – nor any instruction as to reporting at the close of this period.

There are no further  records of his ‘battle with the Medical B oard and the War Office;  but he did not succeed in getting back to France; at some point during the latter months of 1918 he became supervising officer of the 4th Volunteer Battalion of the Essex Regiment. 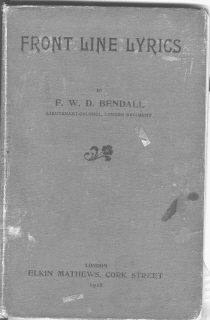 Much of 1918  was taken up with collecting his war poems to be published as a small book – Front Line Lyrics;  many poems had already been published in magazines or papers and some were popular for use with the all too frequent death notices.

Front Line Lyrics was published in November 1918 and generally received favourable reviews;  “ The great war brought to us, amongst so much else, a quantity of verse and a little poetry. That several volumes penned by men who ‘heard Bellona storm’ are destined to live in our literature, as dearly cherished poetry, need not be doubted. One such, unless we greatly err, lies before us as we write. It is entitled Front Line Lyrics and is from the pen of Lieut-Col F.W.D. Bendall C.M.G , London Regiment, whom Southend readers know as supervising officer of the local Volunteers.” (Southend Standard).

Some of the review in the Times Literary Supplement has already been quoted. This review continued  “ some poems are humorous; rather more serious; and of those which have especially struck us we may mention ‘Hospital Blue’ which would do admirably for an appeal for the disabled soldier; a most happily turned vision of the return of the flowers and buds to the tortured French countryside called ‘In Billets  1917’   a moving piece called ‘In Proud and Loving Memory’; a cheery bit of wisdom called ‘A Soldier’s Philosophy’; and a little poem called ‘Missing’, which we venture to quote

Seek him, thou sun, in that dread wilderness,
For that he loved thee, seek thou him, and bless
His upturned face with one divine caress;

Lightly thou wind, over his dear dark head
Where now the wings of dreamless sleep are spread
Whisper a benediction for the dead.

Softly thou rain – and for his mother’s sake
Shed thou thy tears on him; he will not wake.
No weeping thro’ that deep repose can break.

He has no grave, no dirge, no mourning crowd;
He has no pall save the low drifting cloud.
But Glory covers him as with a shroud

‘A collection of very charming and in many instances, amusing, verses by Lt-Col FWD Bendall, London Regiment, has been published by Mr Elkin Mathews of Cork Street, London. The verses have the real touch of the trenches, and it is very easy to see that the writer has been at close quarters  with the various incidents  of life at the front. A typical contribution is the following;

A baker from Bristol, a plumber  from Poole,
A shepherd from Suffolk, a grocer from Goole,
A clerk from the City, a cabman from Crewe,
What matter the trade if he’s wearing the blue.
Hospital Blue, Hospital Blue
Give him a smoke – he’s been fighting for you;
You owe him a debt you can never forget
When you see a man dressed in his hospital blue.

A bullet from Bullecourt, a bomb from Bapaume,
A dozen unpleasant things send a man home,
A whiz-bang at Wipers, or gas at Guemappe
Four inches of steel or a sliver of ‘shrap’;
Hospital Blue, Hospital Blue,
You think of the hell he has had to go through
So – as he’s alive – take him out for a drive
And be proud to be seen next to Hospital Blue.

A seat at the theatre – a sail or a row,
He’s far from his home and has nowhere to go,
A word from a man – or a smile from a maid-
Will help with the debt that can never be paid;
Hospital Blue, Hospital Blue,
How many day dreams will never come true,
With a sleeve hanging free where his right arm should be
Or a shattered leg hidden by hospital blue.

When Fritz was wounded in August 1917 the gazette announced that he had relinquished his command, but retained the rank of Lieutenant Colonel’.

In 1920 he was gazetted full Colonel.