One Man and His Wars by Eve Bendall – 9

Fritz was obviously still suffering at times for the effects of the earlier frost bite , since the diary reads

The weather inspired him to a ballade – one of his favourite poetic forms.

In days of knightly pride
To meet a knightly foe
Baron and squire would ride
In mail – a gallant show
The stirrup cup would flow
The vizor’d casque they’d don
Now is it thus?  Ah no
The pomp of war is gone.

With lance and sword well tried
From donjon or chateau
They galloped side by side
Plumes in a crested row
Thus chivalry would go;
But we are fallen on
Days that have lost their glow
The pomp of war is gone

The light of day denied
By devious ways  below
We crawl and slink and slide
Our days are long and slow,
In mud and filth,  and woe

Deep-marked on faces wan.
For Science speaks, and lo–
The pomp of war is gone

Envoi
Princess, you would not know
That once our buttons shone!
But –courage stays– alto’
The pomp of war is gone. 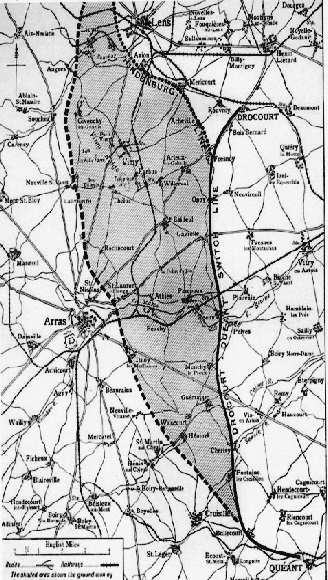 March 10 Mud again. chance of leave – just heard may be home 15/16. March 16 Home. March 19 – from the Gazette “London Regiment; Lt.Col.(temp) FWD Bendall to be Lt Col as from Sept 6 1914. April 2 Arrived; safely in France; travelled all night to within a few miles of my Brigade – six inches of snow. April 4th Field card from front line. April 10 Wish I could tell you more of what I have seen in the last few days – very exhilarating and exciting.

He was almost certainly referring to the opening of the battle of Arras and its’ associated campaigns – and probably to the first battle of the Scarpe in which his division took part. This was “ one of the most important campaigns in which the BEF was engaged yet…….terribly neglected by historians. The British Army launched a large scale attack at Arras ….which, although initially successful, soon bogged down and became a terribly costly affair. The British attack was against the formidable Hindenberg line, to which the the enemy had recently made a strategic withdrawal The battle can be considered to be composed of a number of phases; the Battle of Vimy and the First Battle of the Scarpe (=steep slope) were the opening phases; the Second and Third Battle of the Scarpe and the final Battle of Bullecourt and other actions against the Hindenburg Line concluded the fighting.

April 15 Vile weather – living on tinned meat and biscuits; can’t buy anything of course – mud unbelievable. April 21 Weather improved for the last 2 days; we are resting and enjoying it – the ground for a fortnight awful – the men and horses have had a pretty hard time – the horses have died in scores in the bitter nights – our riding horses tho’ alive are in a pretty bad state. April 27 at the back of the front – don’t like it. 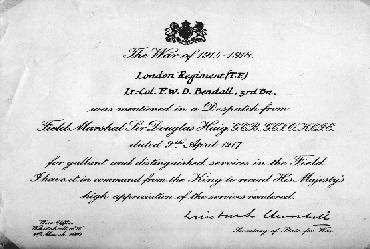 May 3 Wrote last from a comfortable little village – only there a week was sent for two days ago; weather has changed completely – dust now as bad as mud. May5 In a fairly large town to-day – shelled a lot but not fiercely bombarded – we live in cellars – a desolate sight – the horses are skeletons – my grey is sick. May 15 My address has changed -7th Middx ( the 7th and 8th amalgamated) from a deep old Boche dug-out. May 21 Out now – a dreadful time the last week; the shelling the worst I have known; Dug-out constantly hit – this morning absolutely done – worst night the entrance blown in and sealed up with a ton or two of earth; so we had to nip out into a trench, as another unlucky shot would have left us imprisoned. However its over now thank God. Got into billets at 5am, but now at 9pm after sleep, bath and dinner I am fit for anything – we are now resting. May 26 WhitSunday in a nice little village – May 26 Extract from ‘the Times’ – it pleases me’ – mentioned in Sir Douglas Haigh’s dispatches – Bendall Lt Col FWD. June 3 – just had Church parade under the trees in a jolly meadow.June 11 – “Into the breach once more dear friends” very hot weather. June 18 -In a very deep dug-out – old Boche -30 ft down -electtric light. Clothes not off for 8 days ;Wancourt June 28 Still in same dug-out – fed up with this underground business – hope to see the light again in a day or two – and hope for leave in August. Huge dug-out , 5 doors.

The morning air is fresh and cool
Beside the willow shaded pool
And I can dream the hours away
At least for this long summer day,

And in my day-dreams I can see
A happier summer that shall be
When the torn earth has found release
From torture ‘neath the wings of Peace.

Oh–on that longed for summer day
Will there be flowers in Bernafay?
And shall I find uncrumpled fern
Along the banks of Hebuterne?

Will the June roses sent the air
In the lost garden-lands of Serre?
And primroses again make good
The tangled depths of Delville Wood?

Will wind-flowers hide the whitened bones

That made a charnel house of Trones,
And Ginchy – levelled to the earth
Spring in white blossom to new birth,

Will the blood shed at la Bassee
Give colour to the budding may
And silver lilies sweetly tell
Of stainless lives lost at Gavrelle,

Surely some deathless mignonette
Will come again in Courcelette.
And scarlet poppies flutter on
The wind-swept cornfields of Peronne

White seas of cherry-blossom foam
About the orchards of Bapaume,
And clover once again make fair
The sunlit uplands of Santerre.

Oh yes. I see it in my dreams

By Somme’s cool swallow-haunted streams.
And sure am I that without fail
Seed-time and harvest shall prevail

To twine green garlands that will wave
Over the bodies of the brave,
And make the golden wheat-ears dance
Above the battle-fields of France

The diary continued  July 7th “Had a very happy birthday  (6th) in a charming village; a long ride in the morning thro’ a hugh and beautiful forest on my bay; our cook did us well for dinner Am dining with the Brigadier to-night – all most cheery now.  July 19 After further period up there, now  in pleasantness.”

No further recording has survived .

The 3rd battle of Ypres – often called Passchendaele  – began on July 31.  “Meticulously planned, Third Ypres  continued until the fall of Passchendaele village on 6th November….The tactics employed…..are as controversial  as those executed at the Battle of the Somme, a little over a year earlier, and was the final great battle of the war….. As was the norm for any major Allied offensive, on 18 July a heavy preliminary artillery bombardment was effected for the 10 days prior to the launch of the attack;….given such an onslaught the German 4th Army fully expected an imminent attack and the element of surprise was entirely absent…..Over the next few days the offensive was severely hampered by the heavy rains, the heaviest in 30 years, which churned the Flanders lowland soil into a thick muddy swamp. Tanks found themselves… stuck fast in the mud. Similarly the infantry found their mobility severely restricted……as a consequence no renewed offensive cou

ld be contemplated until August 16, when the battle of Langemarck saw 4 days of fierce fighting which resulted in small gains for the British, but heavy casualties.” (www.firstworldwar.com)

Fritz was one of those casualties; he sustained a severe shrapnel wound in the back of his R shoulder, going through to his chest.   It is difficult to ascertain how and when Ida Kate received news of the casualty. 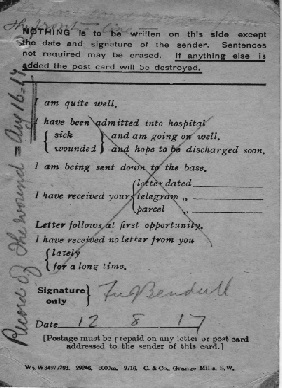 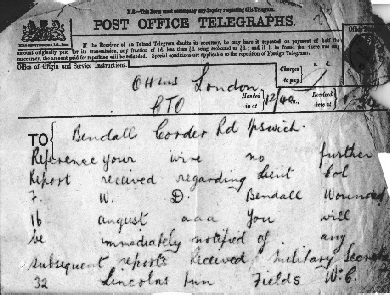 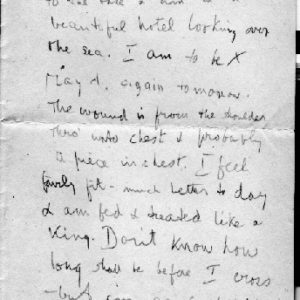 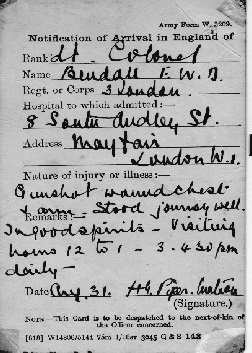 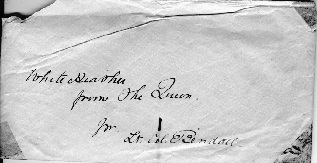 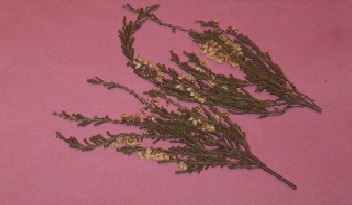 There are a number of documents; Fritz had sent a standard front line post card on the 12th saying  ‘I  am quite well’.  This probably reached Ipswich after he had been wounded. The first date of any document after 16th is a note from the chaplain dated 17th saying he had been slightly wounded, had requested him to write and that he was cheerful.  The first telegram was sent from OHMS at 12.40 on August 23. Two more on the next two days – and one on 31 August.

There were 3 typed letters from IF Record Office, 4 London Wall, London – Territorial Force Records;  dated 20, 22,and 24.. Although they gave no more news than the telegrams, it is obvious that there were ‘noises’ from Ipswich ; “ I beg to inform you that the reason of Lt-Col Bendall’s being wounded not being reported to you earlier was that the report was not received until the date of its communication to you. I regret that I have no information as to the battle in which it occurred, though judging from the daily papers it may have been near Langermarck”.

Fritz managed to write a letter which was undated but probably about Aug 27/28.

Dearest Mater  I have got to the base and am in a beautiful hotel looking over the sea. I am to be X-rayed again tomorrow. The wound is from the shoulder to the chest and probably a piece in the chest. I feel fairly fit and much better today and am fed and treated like a King. Don’t know how long shall be before I cross – but am as comfortable as can be – am of course very weak but  that improves already. Can’t write more now – very best love     Fritz

Fritzs’s wound was serious : a piece of shrapnel had lodged in his chest, virtually touching his heart; a button from his uniform had been carried deep into the wound – this eventually worked its way out and the external wound healed. However it was impossible to do anything about the chest and it was soon discovered that his heart beat had become completely irregular. There  seems to have been concern that  a) the shrapnel might move and penetrate the heart or  b) that he might soon develop heart failure. It is not known how long he stayed in hospital but  – as was the custom – he received a piece of white heather from the Queen, which his mother carefully pressed and kept.

In November he was again ‘mentioned indispatches’ – presumably for incidents in July or August. 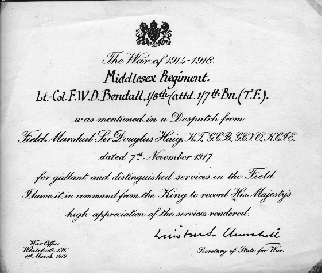