One Man and His Wars by Eve Bendall – 2

On August 4, 1914, war was declared against Germany. The British Army now needed urgent expansion and the first group to whom the War Office looked was the Territorials; within two weeks, a daily newspaper was printing the names of many Territorial Officers who had volunteered.

‘Captain Bendall , commanding officer Bridlington Grammar School OTC, with the permission of his headmaster, has applied for and obtained more important work in the Army, being gazetted temporary Lieutenant Colonel.’

Fritz received a letter from the City of London Territorial Association –
‘Sir, You have been recommended to take Command of the 3rd (Reserve) Bn, City of London (Royal Fusiliers)’

On a Sunday in early September, Fritz wrote to his aunts from the Great Northern Hotel, Kings Cross Station, London;

I am up here in command of 1000 men – the battalion is called the 3rd (Reserve) Battalion Royal Fusiliers. I am staying at this hotel because it is near the depot – and at present the men go home each night – but we shall soon move out to a camp of some kind – if possible in a large house as tents are cold for the winter. I am pretty busy with various things – have a nice lot of officers. The men drill in Regents Park – all London is full of drill parties working hard all day. I am only Captain at present as I am not yet “gazetted” but hope to be either Major or Lieut Colonel when the gazette appears.

Best love to both – Fritz.

It must have been quite a change from a schoolboy OTC. There is nothing more recorded for nearly 3 months ,during which time, presumably, the battalion continued training – there is one press photo of the battalion parading through the streets 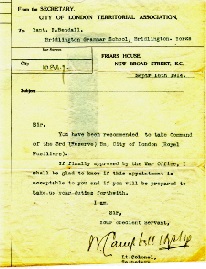 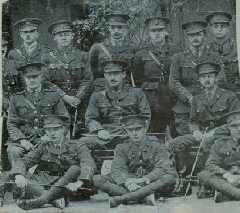 However, clearly, by December, they were considered ready for some form of active service. The strategy used by the War Office was to move units of the Regular Army from various non-combatant places in the Empire, to fight in France, replacing them with units from the ‘new’ Territorial  Army.

On December 15 Fritz sent a telegram to Ipswich “ Warned for Malta next Tuesday probably home weekend will wire when further news” On Dec 23 another wire was sent ‘Boat Neuralia sails tonight‘. The voyage was punctuated by letters and telegrams; on Dec 28 a wire from Gibraltar ‘All well’ and on Dec 31 from Malta ‘Arrived safely’. Letters gave more detail though they took a while to arrive.

Fritz began a letter from the ship

This is begun on Xmas Day in the middle of the Bay. I am very comfortably quartered – one of the State cabins with 2 beds and a private bathroom etc electric lights and fans all over the place. The boat is one of the British Indian Mail Co and the 4th Officer is an old Bridlington boy. We got on board at 3 on Wednesday and were off by 4.30 – l have 600 men on board and 250 on the Avon – being the middle battn we had to split up. There are 1500 men on board and I suppose 200 or 300 of crew – lascars and stokers -the boat is about 10,000 tons and only 2 years old – beautifully fitted up – she and a lot of other BIM’s were taken for trooplng when the war began. I have been quite fit all the time a slightly ‘swimmy head’ being the only sign at all. The other Col is not very well and only appears at intervals. Only half the officers were at breakfast this morning, but most of them are recovering now and I expect they will be alright by the time we pass Cape Finisterre. We have all lascar waiters and attendants – whom I don’t like very much.  The men were pretty wretched at first but have mostly bucked up now – tho’ I don’t think it will be much of a Xmas for them. The TFA sent a plum pudding for each man – I am keeping ours till we get to Malta. I had a letter from Marie on Monday; I had written her one as what I said to her on Saturday I said very badly owing to nervousness. She said frankly that she could say nothing to help me – and that she wanted me to wait 1 ½ years before trying again. She says ‘ Love is a miracle – which hasn’t happened to her yet – tho’ she hopes it will.’ I’m afraid she is looking too high. I don’t want her to mistake pity for love and say ‘yes’ from pity – but in her case there is a danger of her looking for too big a thing. I don’t think my love for her is a miracle; I feel it is the right sort – but I daresay it is not one of the great things of history – and if she is waiting for something like that she may never find it..

Boxing Day 12 noon: Much warmer – am writing this with the portholes open and a nice bright day – we are halfway down the Spanish coast – and shall pass Gib sometime tomorrow. There are all kinds of rumours as to what we shall do in Malta. Some say the Front in 4 months Others that we shall supply drafts for the 1st Battn (the Regular Battalion in France). I think the latter is unlikely as my officers are so young and inexperienced. We get wireless news from the Eiffel Tower and have a paper each day. Had quite a festive Xmas – saloon decorated and the band (ours) played nobly nearly all day long ……..Sunday ……posting this now in case we put in at Gib – fondest love Fritz.