One Man and His Wars by Eve Bendall – 12

From 1927-1932, the Bendalls lived in Birmingham.   Then Fritz was moved to Bedford, where they lived for a further 3 years and Eve began school.

During the early years they holidayed, every August, in Suffolk, at Thorpeness; this was near Saxmundham where Ida Kate , Belle and Sharlie lived – they had a pleasant bungalow (Crossways), a small car (Sharlie, the driver) and a Pekenese called ‘Mr Wu’. It was quite a happy establishment but by 1935,   Ida Kate was beginning to be troubled by dementia.

Once they no longer lived in Birmingham, Fritz began to insist that Marie did no more ‘stage’ work; the Bendall family had never liked him marrying ‘an actress’- and although her brothers   Yarrow and Donald (now himself on the stage), argued with him, he was adamant. 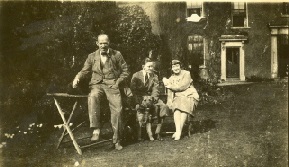 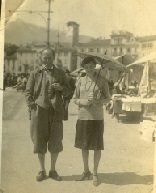 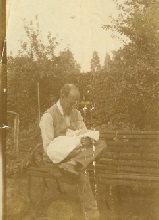 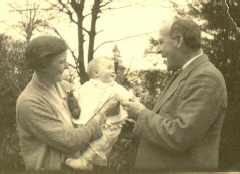 In 1934/5 they moved again, this time to Leeds, living in Far Headingly. By 1936, Ida Kate’s condition was getting worse and either Belle or Sharlie had been ill, so Fritz sent Marie to Saxmundham, to help. This was, to a large extent, disastrous as Marie and the sisters could not get on together – and Marie soon returned home. She was not well and spent a week in a nursing home. One morning, shortly after this, Eve went to her parent’s bedroom to find her mother in tears and her father saying she was not going to school that day. After breakfast they set off in the car and arrived at the Retreat, near York – one of the few mental health hospitals at the time. Eve was left in the car – and some time later, Fritz returned; he started the car and Eve turned, to see her mother standing at the gates in floods of tears. On the way home, Fritz told his 9 year old daughter that her mother would be in the hospital for 6 months, and unwell for a further 10 years; there would now be two servants – a cook and a housemaid- at home and she was to be good and help them.

It was all too true; Marie came home early the next year but was still very depressed,   and could not go out alone – Eve accompanied her whenever she could. In July 1937 Ida Kate died.

In 1938 the family moved to Bath – Fritz was now a Divisional Inspector. Marie began to improve slowly.  In the summer of 1939 they went on holiday to Woolacombe, in Devon; at some point, Donald joined them, and half way through August, Fritz and Marie returned home – followed by Eve and Donald ; on the way home he tried to explain to her that there was probably going to be a war – quite exciting for a 12 year old; it is important to explain that Fritz had never talked to her about his first war experiences and she had only a vague impression of the 1914-18 conflict.

On Sunday, September 3, 1939, the family – as usual – went to church (C of E Matins).The vicar had a radio in the pulpit and the congregation heard the Prime Minister announce ‘ and therefore I have to tell you that this country is at war with Germany’. At the time, Eve did not, in any way, appreciate her father’s silence – but came to realize , much later – what the announcement must have meant to all the men who had fought through ‘the War to end wars.’

Bath was considered a safe area and many civil servants from London were evacuated there; a man from the Admiralty was billeted with the Bendalls. At school the girls learnt to use stirrup pumps, and what to do during an air-raid. Fritz became very concerned as he believed that Hitler might well attempt an invasion, and that the likely areas would be the East coast , including Suffolk; in his ‘head of the family’ role , he told Belle and Sharlie that they should sell the Saxmundham bungalow, and move to Bath; this they did – reluctantly –   selling the bungalow and car and disposing of the peke. They moved to a flat in a modern block in Bath. Three months later, in the summer of 1940 (after Dunkirk), Fritz was given a new post, at the War Office, as head of Army Education, and everyone had to move up to London, just as the blitz was beginning. A large house in Cheam just south of London was bought and the Bendalls, Belle and Sharlie and Marie’s mother all moved in. Eve was sent away to school, somewhat – she remembers – to her relief, as the atmosphere in the new house was rather trying. Fritz gave her a poem on the day she set off for her new school. Over the Christmas holidays the blitz was at it’s height; Fritz would not have a shelter.

During term-time Eve had weekly letters from her mother, whose depression was not improving – at the bottom of every letter was ‘AVO’ – Amor vincit omnia (love conquers everything). The war did not change the school curriculum much, but university places were very limited and Eve was not in the top stream; nevertheless she achieved 4 good Higher School Certificates (A levels to-day) including 2 in Maths, and went home to tell the family (with her school’s approval) that she would like to study engineering. She met a wall of objection from her father and his two sisters which she never understood, until   – in the internet era – she could see the family background. They decided that architecture would suit – despite the fact that she had absolutely no ability in drawing! She lasted 5 terms, and then the college Principal informed her that she would never be an architect but could easily go for construction or surveying. Unable to face going home with this news she applied for and entered nurse training, and continued in the NHS for 40 years.

During the last year of the war, Fritz became part-time at the War Office and the family moved out of London to a big house near Odiham in Hampshire.

In 1946 Eve came home for a weekend to find that Belle had been diagnosed with cancer and was to receive treatment in London. Talking to Belle and Sharlie, she found that they were most anxious to get back to Suffolk; Eve tackled her father and was told very firmly to mind her own business. When Belle was in hospital in London, Eve visited her quite often, as she was in training in London. However the treatment was unsuccessful, and she died in 1947; Sharlie immediately moved back to Ipswich.   Fritz was now retired, and he and Marie moved to a little cottage, in a village near Alresford.

Here began what were, almost certainly, the happiest years of their married life. They both gardened a great deal, had a few bantam hens, and Marie kept bees. She also   started an amateur dramatic   society in Alresford which was quite successful; however, Fritz minded her going off for 2 evenings a week.   ‘What am I going to do with him’, she said to her daughter, who was home for a few days. ‘Why don’t you give him a part!’ said Eve ‘then he could come with you.’ This worked better than could have been expected and Fritz enjoyed himself – although he over-acted badly!

In 1951 Eve came home for a 4 months (between jobs) so that Marie could visit her various relatives; during the same period they celebrated their silver wedding.

The same year, Sharlie was taken ill, in Ipswich; Fritz asked Eve to go – she caught a night train from Bath (where she was working ) to Ipswich, but Sharlie died before she got there. She stayed to deal with the funeral and other matters, and found that her aunt had left her £2000 – quite a lot of money at the time.   Fritz was furious – ‘the money should have come to him’ – even more so, because the other half of Sharlie’s money had gone to Belle’s (illegitimate) daughter – now married, with a little boy – whom he had never had much to do with.! 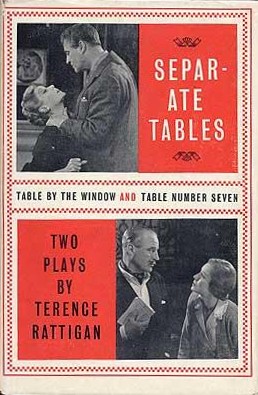 In December 1953, Fritz died – suddenly and quietly; he was 70. The GP – who lived next door diagnosed a heart attack. Eve – now 25 and working as a Ward Sister in Dorchester – was woken by the police to be given the news; it was a Sunday morning and she now had a car, so she got home quite quickly to find that Donald had arrived just before her. They comforted Marie, who was not too upset; but after discussing arrangements for the funeral, she said – ‘I don’t know what I’m going to live on – he hardly left any money’. Donald said ‘ Don’t be silly, Jane’ (the Eccles always called her Jane) ‘ You’re going back on the stage – I think we’ll try Bristol Rep.’ Eve looked at him in amazement – although she knew the story that her mother had been an actress, 25 years ago, it had never been real to her. However she didn’t argue. The funeral went well and Fritz was buried in Bighton churchyard. Marie/Jane packed up the cottage and moved to Bristol. 6 months later – as Jane Eccles – she was in the West End, with a part in a new Terence Rattigan play ‘Separate Tables’. The play ran for more than 2 years, and then moved to Broadway – and Eve went to New York for Christmas with her ‘new’ mother. Jane returned to England in 1958 (Photo back from New York) and was hardly ever out of work till her death from cancer in 1966. Eve took her ashes to Bighton, where they were buried in her father’s grave. She now cleared up all her mother’s belongings, and among them found all her fathers correspondence to his mother – and all the documentation used in this history.

Dorothy married Herbert Baker ,a Methodist minister, in 1906 and they went to Rhodesia as missionaries. They had 4 daughters while abroad –  Dorothy, Gwendolin, Katherine, and Tina- returned to UK in 1919 and had a 5th daughter – Joyce. They all died within the last 15 years – I went to Joyce’s memorial service in Chesterfield earlier this year. Only Katherine married – she has 2  children – John Bird is a Professor at Manchester University and Kate Bedford is married, lives in Shropshire, and has 2 grown up children. She and I met up on line a few years ago, have met, and correspond.

Belle was a governess in ‘posh’ families ! In 1911 she had a baby -Jane Rose- no father on the birth certificate. I believe she was brought up in Uckfield, Sussex; Belle and Sharlie always kept in touch. I think she married an airman named White at the end of the war.

Sharlie stayed at home to look after Ida Kate. She was extremely gifted.

….and a curious footnote….   http://prideofanglia.com/tmwmtt/details.php?player=FWD+Bendall

The records of Ipswich Town Football Club show that he made 9 appearances for the club over seasons 1900-1907 (while at Ipswich School then home from Cambridge)  and scored 4 goals in all (with other old boys of the school).

had a very successful and significant career in nursing  and now has a high profile on the internet with references to her books and lectures about the state of nursing in recent decades. 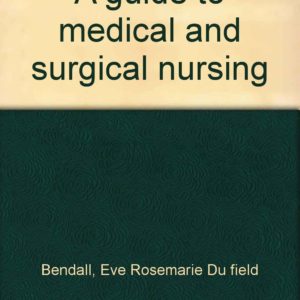 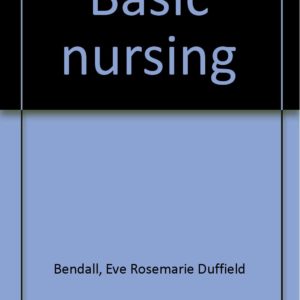 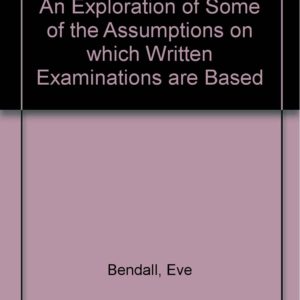 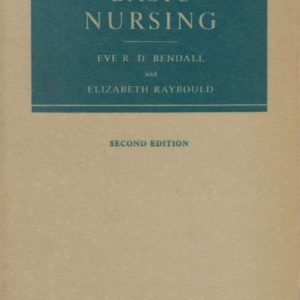